Best Strategies to Prevent Data Loss in Your RAID Array 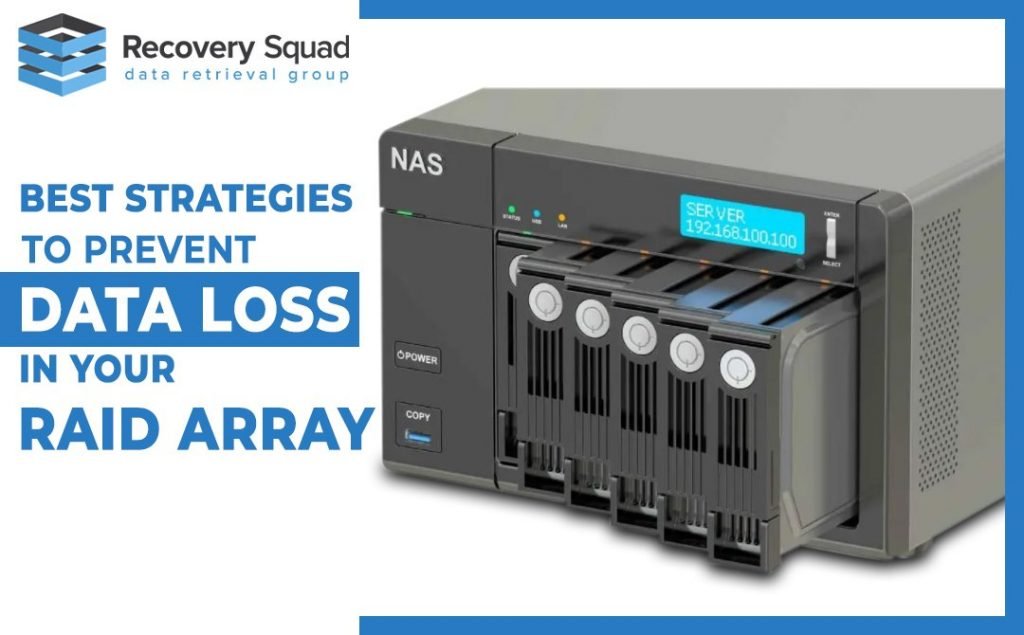 Ever since RAID arrays have been introduced, they have redefined how storage systems manage to store data. The basic concept behind this is that the technology behind RAID is quite simple, and it is relatively less expensive to implement. A RAID array includes a configuration of several physical hard disk drives connected with the RAID architecture which assigns a RAID level to each drive. The architecture then distributes data across the disks while representing the entire array of disks as one disk to the operating system. While the RAID levels have various protection mechanisms, the technology is relatively new and has a few holes in its system. This makes it necessary to know the;

While RAID data recovery is quite possible in most cases of failure, it is always better to have a backup of your data. Never consider your RAID array as the backup for your primary data, as a severe RAID failure can pose a significant risk to your data. It is essential to consult an expert for the proper backup strategy that can minimize your data loss. Cloud backups can seem like a good alternative, but they have limitations such as your internet speed and privacy concerns. A better strategy can be to create an in-home backup server if it is in your budget. If your data isn’t a lot, consider using several individual disks for your backup in a compressed state.

While different RAID configurations have different features, they all have some prevention for data loss. Despite this, you must choose the right configuration to ensure that the risk of failure stays a minimum. Creating a conceptual storage design for your RAID array before incorporating it physically is a good idea. While your configuration may prevent overall failure, all single hard drives in the array will eventually fail. When this happens, depending on your configuration, you should replace the faulty disk and have the data map rebuilt without any loss. RAID 5 data recovery isn’t that simple and requires help from an expert.

If your RAID 5 system has had two or more failed drives in the past, there isn’t much use in trying to replace the failed drives and run a rebuild as this can cause permanent data loss in most cases. Most disks come with a hot plug that allows removing and replacing the hard drive without shutting down the system. While this works for rebuild operations in most cases, doing so in a RAID 5 configuration with multiple failed drives isn’t a good idea. If something causes the procedure to fail, then the rebuild will cause additional damages and isn’t worth the risk. You should instead consult an expert regarding the recovery process.

Always Be Prepared for the Failure

Suppose you have purchased a manufactured RAID system, it is very likely that all the hard disks come from the same batch. This causes all the disks to fail at almost the same time. Because of this fact, it is crucial to check the status of your hard drives at regular intervals. Being prepared for failure, in this case, can help you prevent significant data loss. If one of your RAID 5 disks fail, then you should replace it immediately as waiting too long can cause your array to experience severe data loss as another disk may fail soon after. You should also keep the contact information of a reliable data recovery service provider such as Recovery Squad ready at all times since the quicker you act, the more data you can save.

Also Read: How to Recover Data from a Broken Raid Set?

Label All Your Drives and Their Images

When a drive fails, an image of all available drives can be quite handy in helping you get your data back in case of a failed rebuild. An example would be a scenario where the rebuild stops at 5% with a consecutive data loss. In this, the disks’ content gets destroyed forever, and there isn’t much that can be done to avoid it. However, when you have RAID images ready, you can get a data recovery expert’s help to rebuild the array with the images to reconstruct the original data structures. You should ensure that all backup images are labelled correctly to ensure that their state in the array remains the same.

The more complex your storage system is, the harder it gets to recover data from failure. In the case of RAID arrays, it is a good idea to always contact the data recovery expert before taking any steps on your own. This can help save your data from unforeseen circumstances.