SSD VS. HDD: WHICH IS BEST FOR YOU? 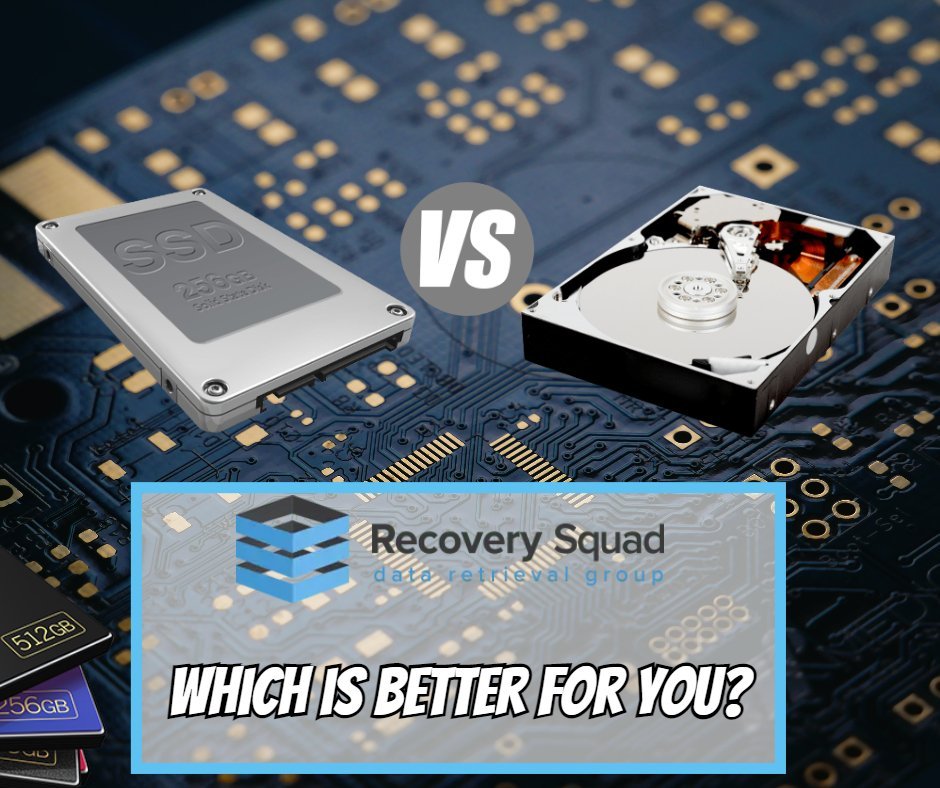 Computer storage is all about finding the right balance. The type of storage your computer uses matters for performance, including power usage and reliability. Solid-state drives (SSDs) and hard disk drives (HDDs) are the two main options in PC storage. SSDs are more expensive but also faster, use less power, and have no moving parts, so they’re much more reliable—especially when you run into something like a HARD DRIVE CRASH. This guide summarizes the differences between SSDs and HDDs to help you consider the right choice for your computer.

The type of memory your computer uses is important for performance, including power consumption and reliability. Each type of drive has advantages and disadvantages and deciding which type is right for you depends on how you use your computer. Our guide to HDD vs SSD will show you how both types of storage drives work and what they mean to you.

What Is an HDD?

An HDD that stores and retrieves data magnetically is called a Hard Disk Drive. HDDs are used in PCs, servers, laptops, external storage systems, and other computing devices to store programs or data. Entire computer operating systems can be saved on one hard disk, as well as years of work documents. They have moving parts like any other hard drive system. As such, you should be careful when transporting your HDD to avoid damaging the disks inside.

What Is an SSD?

Solid-State Drives use integrated circuits and RAM to replace the moving parts of an HDD, leading to faster boot times and greater reliability. SSDs (Solid-State Drives) use flash memory to store data instead of a spinning disk. Not only do SSDs read and write data much faster than traditional HDDs, because there is no seeking time; an SSD can access any data stored within the drive incredibly quickly. This speed, combined with compact design and lightweight makes SSDs ideal for replacing those bulky HDDs in your laptop.

In addition to the differences between the two drives, there are other aspects: HDDs, for example, are power-hungry and generate noise and heat, while SSDs offer lower power consumption, are silent, and are more durable. The moving parts of an SSD are also more durable than those of a hard drive, especially if you accidentally push your laptop off the table or the floor. Hard drives are ideal for large desktop computers, large-capacity external hard drives, and Network Drives (NAS). These drives are also becoming increasingly popular in laptops and solid-state storage for feature phones and tablets. If you encounter a computer with a hybrid drive installed, it is important to use a little SSD storage to access data while leaving the rest of the hard drive components alone.

If in recent years you have bought an ultra-portable laptop, you probably have a solid-state drive (SSD) as primary boot drive. Boot drives are built into desktop PCs, and SSDs are the cheapest models. But bulkier gaming laptops have moved away from SSD-based boot drives, and a subset of budget machines prefer hard drives (HDDs ).

In terms of capacity, SSDs for computers are currently available in 120GB and 4TB capacity, while hard drives can reach up to 250GB or 1.4TB. Measured in terms of cost, capacity is where hard drives have the edge, but when SSDs fall in price, it becomes less of a differentiator compared to hard drives. Although SSDs use newer technologies, they will remain the most expensive hard drives for the foreseeable future, even if prices are lowered over the years.

Also Read: Revolutionary Benefits of Upgrading from HDD to SSD

Comparing the two kinds of storage, it’s clear that an SSD is made for speed. Because there are no physical moving parts, they offer faster boot-up and shut downtimes. They’re also faster at reading and writing data and opening programs. For example, an SSD can launch a game or program in one-fifth the time it takes an HDD.

Speed is essential in today’s computing era. The Intel SSD D5-P5316 offers much more than an HDD, with 7x faster transfer speeds. This large enterprise-grade SSD allows you to store and retrieve up to 15.36TB of data, making it the ideal server drive. Compatible with exons 2 & 3U rackmount solutions, this unit is a great storage option when trying to maximize your storage space.

SSDs are not always the perfect fit for all data storage needs. They have their advantages, but they may not be a good choice for storing terabytes of data or archiving workloads that require large amounts of sequential writing such as video editing or database processing. Depending on your workload and system configuration, you may find a hybrid disk (HDD+SSD) makes more sense.

If speed is your priority, a solid-state drive should be on your radar… SSDs use flash memory chips rather than spinning platters… For now, SSDs are still more expensive than HDDs—prices for 1TB of storage in the two technologies differ by about $200—but costs are coming down.

The SSD Cost Savings over HDDs spreadsheet takes the confusion out of assessing performance and reliability requirements from a pricing perspective. What it does is present a fairly comprehensive summary of the current SSD cost per capacity as well as the predicted path to lower cost per gigabyte in future SSD technology. This makes it possible to compare manually-specified replication levels with this “inflection” point. If your manual estimates are above the inflection point, you are simply not seeing the benefits of using SSDs today for replication.

SSDs have two distinct types of data reduction that can be leveraged: space efficiency and performance optimization. Space efficiency reduces the physical footprint of the drive-by only writing sectors where data has changed rather than rewriting the entire track. This is accomplished by maintaining a “table of contents” for each NAND die in the SSD, recording which flashes cells have been erased or written to since an earlier time. In this manner, any additional writes are preserved on-die until such time as a garbage collection pass is run across all-flash sectors to restore them to a consistent state. Performance optimization relies on the same mechanism through which SSDs

Finally, SSDs Are Your Best Bet For Cost Savings. Yes, hard drives are cheaper in price. But consider the hidden costs of HDDs, such as their power consumption and heat output. A 1TB HDD is roughly 10 times more expensive to buy for the same amount of storage space than a 1TB SSD.