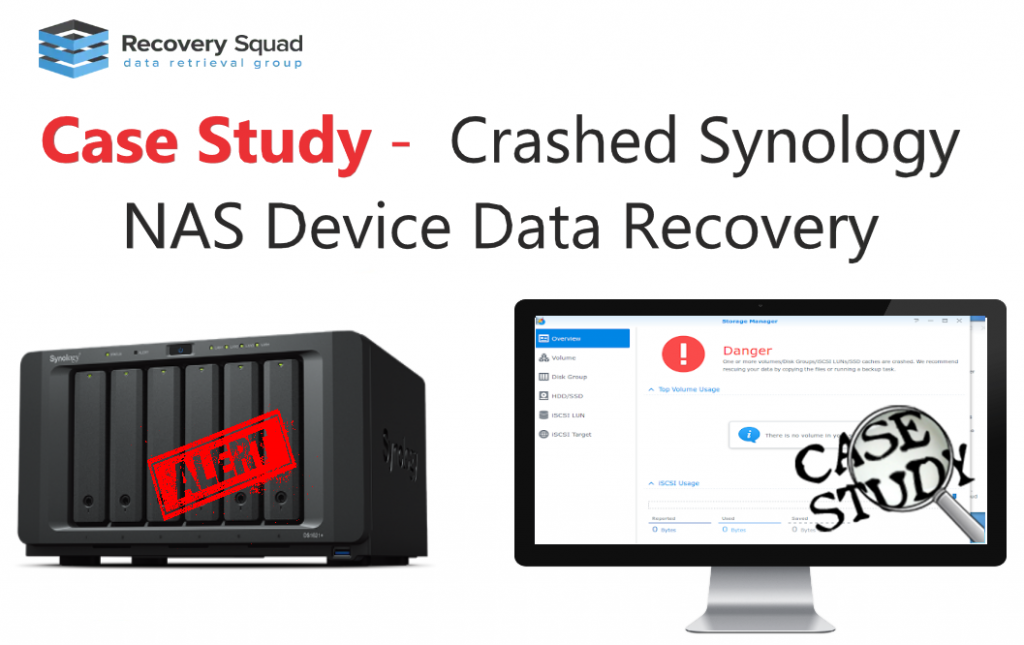 Synology volume had crashed due to multiple RAID disks failure.

An IT company in Melbourne recently contacted Recovery Squad when both volumes on its Synology NAS crashed. The company’s server, a 12-bay DS2415 with a 12-bay DX1215 extension configured in SHR mode as a RAID

After the crash of its server, the company reached out to Synology for assistance. Despite 7 days of effort, the manufacturer’s technicians were unable to recover the company’s data remotely.Ultimately, they were unsuccessful. Synology referred the company to Recovery Squad when it could not recover their data.

Recovery Squad has a team of professionals dedicated to recovering data from Raid Drives. We are equipped with custom utilities to ensure fast recovery. Our RAID recovery and repair department employs a wide range of tools and techniques to restore your data. We’ll analyze the drive we’re recovering from to determine why it failed.

After a diagnostic, the hard drive array was found to have numerous flaws, including a poorly mounted hard drive head, a bad hard drive partition and boot sector, and damaged file system. The server was unstable, and there were multiple problems with the drives as well as the RAID array.

After we saw that the drives were corrupted, we imaged them in a Class 10 ISO 4 certified cleanroom and made sure no additional damage occurred to sensitive internal drive components. Once imaging was complete, the drives went to the development team.

Once the system was de-striped, the development team used proprietary tools to extract and repair all data before it was exported to secure storage servers.

For every hard disk drive, flash memory device, or high-capacity NAS, SAN or RAID system that needs data recovery, the job is different. Successful data recovery requires the right set of skills and tools. Because RAID systems can fail due to faulty hardware, problems with the underlying software, human errors, or a combination of all these factors, it’s important to ensure that your data is always backed up and accessible.

Although there are many causes of data loss, such as hardware failure and human error, the most common causes for Synology DiskStations and RackStations include:

Software failure – Synology NAS servers have been criticized for shipping with a version of DiskStation Manager that is not sufficiently secure, and may result in hacking attempts or software triggers that limit access to your data.

When your Synology storage needs are critical to the success of the business, turn to Recovery Squad for emergency service or ship your device to the recovery squad. With Recovery Squad’s Emergency Service, your NAS data will be recovered in 24 hours or less. Recovery Squad provides emergency Service for all Synology models employing SHR that contain RAID5 or better. We can even assist you with storage migration services that allow you to keep your NAS online during downtime.